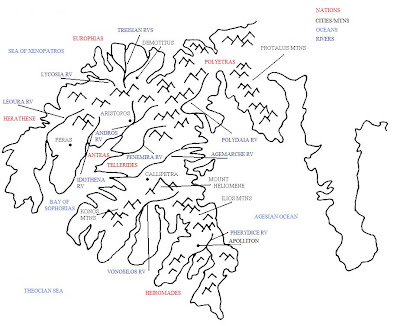 So this is the newest version of the New Olympos map. I was tinkering with names for the rivers the other day and decided I liked what happened, so there you go.

The story is this: It's set in a future time when humans have absolutely perfected genetic engineering and have no qualms abusing their new found "genius". Because it seems like everything scientific has Greek or Roman names I'm using that as cause to make us/humans decide to make mythological figures a reality. So we cross breed human genes with those of lions, wolves, eagles, hawks, horses, bulls, goats, rams, and other various critters to come up with the races. I'm thinking we also create hydras and monsters and junk.

We find/terraform a new planet - the map I made is just a small section - and give it Greek-ish names. The ships and space stations that orbit this planet will be given actual Greek names: Athens, Sparta, Thebes, Minoan, etc.

So we make the other races: Leos, Lykos, Aetos and Gerakis, and Agelios first and plant them on this new world. But because people are over-confident, self-righteos dumbasses they don't stop to think " hey, we've just created a whole population of natural enemies on one world together" , so they have to make super humans (reminiscient of and named after Greek heroes) and place them smack in the middle to keep the peace. However, even with these genetically modified "super humans" their presence is still too insignificant to stop anything but minor conflicts between the beast races. The warring species are just cordoned off into their own nation states and the heroes try to keep bloodshed to a minimum.

This is where the space marines from jump ships come into it. When the world is on the brink of chaos the powers that be decided that they'd rather see the whole thing obliterated than let their hubris win out. So the marines are deployed to clean up the mess the government and scientists made, but when the beasts and heroes realize that they are about to be wiped out they band together and fight back against anihilation at the hands of their creators.

Revisiting this storyline months after its original inception made me realize just how campy the idea really is. I don't know how I'm going to work it out since there a lot going on and a rather meaty sci-fi presence which I am completely unfamiliar with. Therefore any tips and/or suggestions and resources are very welcome.

And what the hey, it's just for poops and giggles anyway. Besides, Hollywood makes huge blockbuster movies of this type of crap all the time (300, Clash of the Titans, etc) so maybe there is yet hope to be rich and famous.....ya know, because writers are just rolling naked in mounds of cash.
Posted by Chuck Workman at 8:38 PM 1 comment:


I had the greatest idea EVER occur to me this afternoon!

While I was driving around the North Fork of the Duchesne River this past weekend with my dad I kept telling him how the mountains would be a great hold fast in the aftermath of the zom-pocalypse. There's water, wood, game, fish, and the terrain is far too rough for the walking dead to navigate....thank you Max Brooks and WWZ for the idea.

It's been nesting in the back of my mind ever since. Then whammo!! At work the pieces cascaded into place and formed the zombie-western, post-apocalyptic story of Dead Reckoning.

As always, I wasn't nailed to the idea until a thought up a title that fit just right. Dead Reckoning works on many levels:

1) Wikipedia defines "dead reckoning" as - the process of estimating one's current position based upon a previously determined position. While traditional methods of dead reckoning are no longer considered primary means of navigation, modern systems (GPS) are very widely used.
A disadvantage of dead reckoning is that since new positions are calculated solely from previous positions, the errors of the process are cumulative, so the error in the position fix grows with time.
This applies very well because the whole premise of the story is that the generation (or possibly the next generation - 2 from the zom-pocalypse) following the outbreak has reverted back to Old West style living. They only vaguely know where they are headed based on the previous period of American history. They are learning as they go through trial and error and finding ways to adapt to rougher living, competition with other survivors, and contending with the ever present threat of zombies. A second application is that technology has failed almost entirely because there is no one left to pilot the satellites, keep the ISPs humming, or generally leave the lights on. Therefore a humanity that has become increasingly dependent on mass media, abundant power, and knowledge at the touch of a button is now forced to eek out a living in the wilderness like their forefathers.
2) A definition for "reckoning" is - an opinion or judgment, or the consequences/retribution for one's actions.
This fits because in the story it is not known/no longer known what caused the outbreak to begin with. Some think it was government work/weapons/testing that lost control and others believe it to be God's judgment on a crumbling, immoral world. Either way it just so happens to be that it is the dead wreaking havoc against the clustered pockets of lingering civilization.
The whole thing won't be entirely Old West....that would just make folks think there was a post Civil War outbreak. There will be those with modern firearms, but ammo (particularly brass shells) is running short and people are going back to black powder weaponry. Fuel was mostly consumed as people fled into the mountains from all over the country. Air travel, aside from the rare glider or hot air balloon, is nearly non-existent. Travel by horse and wagon is easier than it was in the late 1800s due to the fact that paved roads still criss-cross the country, but they are falling apart, dead ending in the canyons, or being washed out from repeated storms and no maintenance.
Another problem....beyond the obvious zombie infestation....is that Mad Max-ian bands of cannibals and marauders have formed to pillage and plunder the settlements. And what is a sleepy mountain town without a self appointed, greedy baron out for land, power, and domination. These fat cats monopolize trade, passage, and any source of power (electricity, water, fuel, etc). Perhaps some even construct pioneer style forts which they defend with armies of hired thugs who run amuck and present yet another threat to those trying to pick up the pieces.
Hunting is difficult because some animals have become even more skittish of humans due to the wandering dead, while others (bears, large cats, wolves, etc) have become much more violent and aggressive, attacking any human and tearing them asunder. They do not consume the flesh of zombies...aside from your routine scavengers like carrion birds and coyotes. Animals cannot become infected from the bite of a zombie because they lack the brain physiology of a human which stores the zombie-ism.
Printed books....already becoming a rarity (imagine the future!) are treasured - the most highly sought after being Max Brooks' Zombie Survival Guide, and what would be the American West without the zealous Bible thumpers clamoring for leadership of their flock.

Posted by Chuck Workman at 6:07 PM No comments:

Lucky find, even luckier save

Check it out!! (*unless you're Shelley, in which case you should heed my disclaimer/warning before checking it out)

I don't remember when I stumbled across this site.....must have been about 6 months ago or so.....and I certainly don't remember saving it to my favorites list, but I'm very glad I did. The amount of information is overwhelming, the dedication is impressive, and best of all the inspiration is endless!

*Fair warning to Shelley: it's a definite DO NOT read before bed! Your head will be spinning with ideas as you lie there staring up into the dark wishing you could sleep because you have so much to do tomorrow. I thought about hyphenating all of that, but felt as though I'd be squandering a lifetime allotment of hyphens.
Posted by Chuck Workman at 11:21 PM 1 comment:

Chuck Workman
I graduated with honors from the University of Utah in 2010 with a Bachelors in Anthropology. I'm fortunate to be working full time again although it detracts from what I really like doing. I'll see where my creativity takes me...and if I can't turn a profit writing and doodling, maybe I'll go back to school and be an archaeologist...and fail to make any money there either.