Back with big news and photographic evidence!

Big news first: I discovered this awesome new blog a couple weeks ago and lurked for a while, now I'm officially following. Does that upgrade me from "lurker" to official "stalker"? Either way, I'll accept the mantle. Here you go Nils, I'm paying your mention/link back in kind:

And now on to the nerdatorium pics. Brace yourself, there are lots. Sorry for the flashy glare on some, it's what happens when the poster paper is glossy. 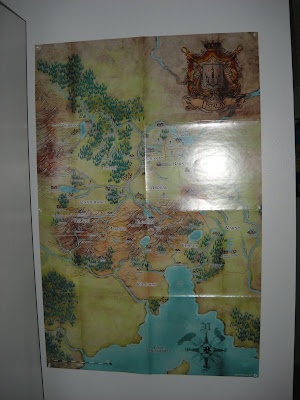 This is what one is first confronted with when entering the nerdatorium. This is the Ustalav region of Pathfinder, which you'll see in a sec. I'm thinking of making a sign to hang on the door (yes, like a teenage girl trying to keep anyone and everyone out of her room) that reads "Please Knock: World Building in Progress" or, for the more blasphemous, "Do Not Disturb: It is the 7th Day and the Creator is Resting". 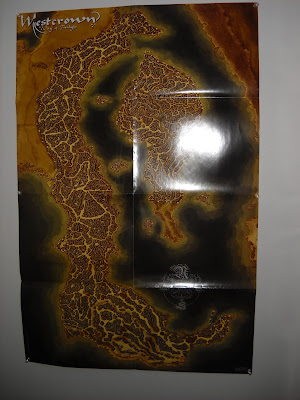 This is the poster of Westcrown behind the door. 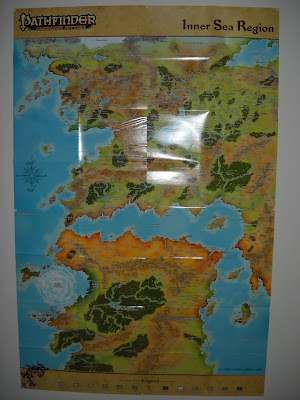 This looks like just another poster map, right? Oh how wrong you are....this is THE wall map to end all wall maps! If you've linked to paizo.com before you'll know what I mean. 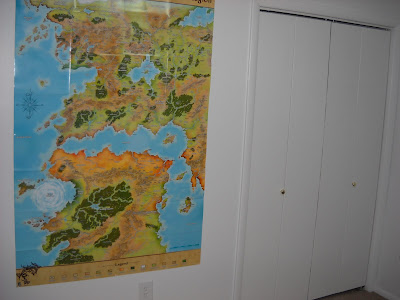 Just look at that monster! That's actually 4 posters that combine into one gi-normous map! It's the entire Inner Sea Region of Pathfinder. I took this shot to show the size comparison next to the closet door. This was the perfect use of that otherwise awkward bit of wall space. I couldn't even get the whole thing in the picture, the room is only so wide to back up for the shot. 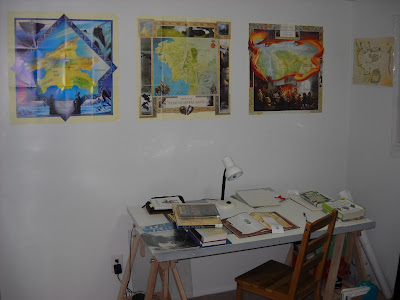 This is the back wall of the nerdatorium, aka Tolkien Corner. It's some awesome Middle Earth maps I found while in Texas for a bit this past summer, hanging above my drawing table. I still can't believe I finally have a real table, I used to just lay on the floor. You can't tell, but under the stack of books is a built in tracing table - so cool! These next few pics are close ups of Tolkien's ground-breaking, foundation-laying fantasy world. My hat is eternally off to that man! 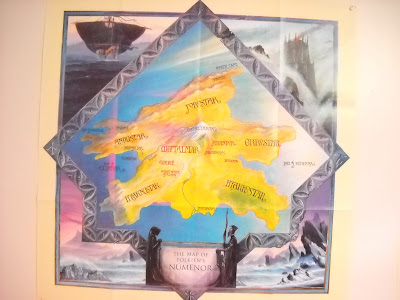 Numenor, before it was lost beneath the sea. 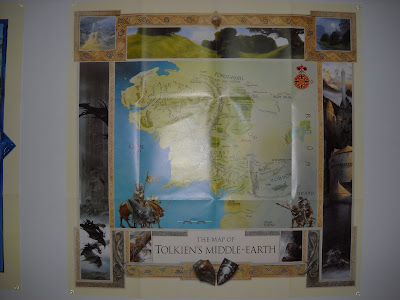 Middle Earth. Sorry for the bad flash, it was even worse if I tried to get closer, and too dark without it. 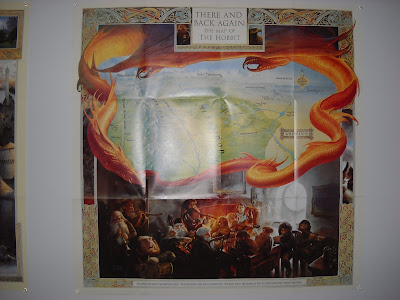 The Map of "The Hobbit". Man I love that book! I've read it 3 times now and I'm sure I'll read it again before each of the movies come out. Hallelujah that Peter Jackson is directing those too - they deserve nothing less than consistency with the other LOTR movies (even if Thorin does look a bit like a Klingon). Again, sorry for the flash that blotted out the Misty Mountains and westward. 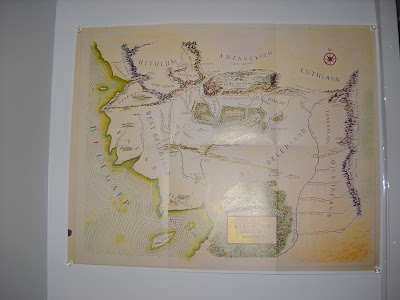 Beleriand, the northernmost part of Middle Earth. I believe I got this map out of "The Children of Hurin", another fantastic read and one I'm sure I will revisit. Or perhaps this was in "The Silmarillion", either way a great map in a great book. 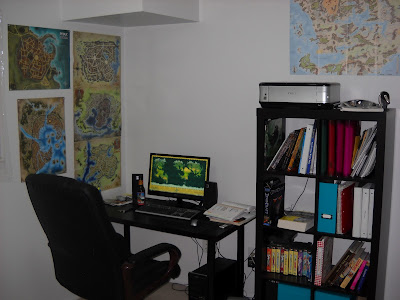 This here is Compie Corner, where I spent hours upon hours trying to "make the magic happen". Surprise, surprise, my wallpaper is a fantasy map - thank you Aventhar of Cartography Guild. Yes, that chair is very comfortable. These are 5 of about a dozen town and city maps from Pathfinder. I would love to have all of them up all the time, but I simply don't have the space. So I started with my five favs and I'll rotate through the stack as the notion strikes me. Yes, that's a beer by my pen cup. I usually have a few whilst hammering the keys and clicking the mouse. Sometimes I drink because it helps. Sometimes I drink and it doesn't help at all. Mostly I drink all the time because...well, I'm a drunk. 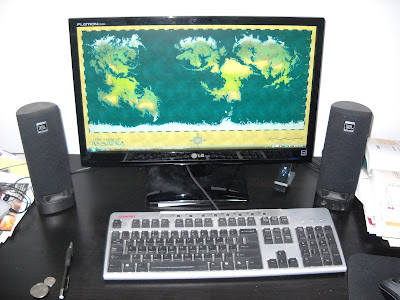 Here's a close up of ye old computadora. That keyboard is going on 10 years old and still going strong. The new computer came with one of course, but I found I just didn't like the feel of it. OCD much? Yes, yes I am. The coins to the left are because I was jingling them for size and weight feel while mulling over a currency idea for stories. 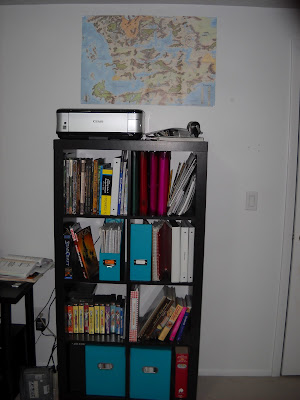 This here is the handy, dandy bookshelf that replaced the clunky old dresser I was using. The left half is mine - within easy reach of the desk - and consists of: scanner/printer, D&D manuals and other such nerderies, computer games, comic books, and file folders of maps. My wife has claim to the right half (we planned it that way, because she's always right and I'm always the other....you know, the W word) which is much more adult and useful (just like my wife) which has important paperwork, college fundraising binders, cookbooks, and a dictionary. 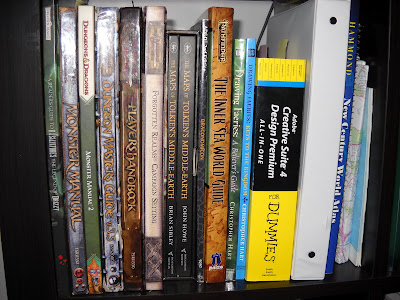 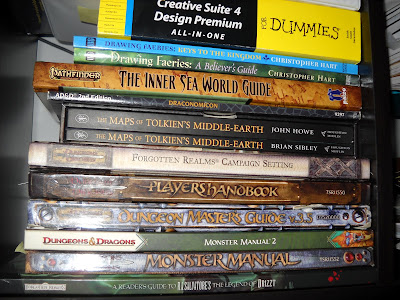 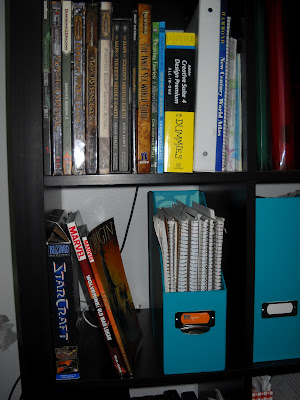 These are obviously close ups of the most important shelves of world building inspiration, complete with the voluminous computer idiot's guide (because yes, I am a CS4 dummy in training) and my numerous notebooks containing drivel compiled over years. And, as you can see, the Wolverine "Origin" comic simply because it's aaaaawesoooooooome and I read it again last night.

Hang in there - we're coming to the end, I swear. 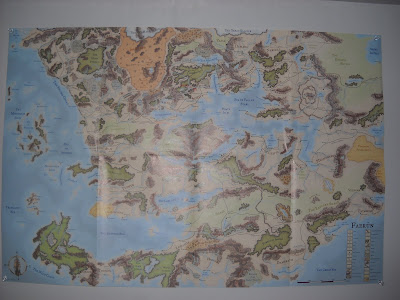 Forgotten Realms above the bookshelf. Because why in the hell would I have all those D&D manuals without the map to go with them? Thank you Ed Greenwood for crafting this amazing world. If you could tell, on the shelf I had the readers guide to R.A. Salvatore's "Legend of Drizzt" which came with this big map. And The Inner Sea World Guide, which I purchased to flesh out the huge Pathfinder map/world I'm just beginning to discover. 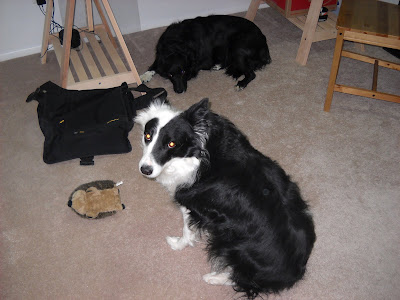 And last, but certainly not least, my faithful companions Domino and Shadow - since they did their damnedest to try to get into each and every shot and dad had to keep shooing them out of the way. I figure they earned a spot in the line up. They're right where they usually are, Shadow crowding my feet under the desk/table and Domino right in the middle of the floor where she's to be found snoring when not honking her hedgehog, and noisily slurping her butt when not doing either of the first two. And that face says "Dad, I can't believe you just put that online about me! Hopefully people got tired of your excruciatingly looooooong post before they got to the part about my butt."

Chuck Workman
I graduated with honors from the University of Utah in 2010 with a Bachelors in Anthropology. I'm fortunate to be working full time again although it detracts from what I really like doing. I'll see where my creativity takes me...and if I can't turn a profit writing and doodling, maybe I'll go back to school and be an archaeologist...and fail to make any money there either.